What is it about Northwest beer that makes the sun so freaking hot? Not that it isn’t the most deliciously hoppy, amazingly bitter, stupidly strong beer in the land, but it sure is thick. It’s really difficult to imagine gulping down a heady IPA after eating a delicate piece of white fish, for example, or a meal-in-a-bottle stout alongside an expensive cheese plate, but the good news is that heavy dark brews aren’t all the Northwest has to offer. The good folks over at 16 Tons celebrated its Week of Wild and 2nd anniversarythis week (and will continue through Sunday, April 29) — an event that takes the focus off of hops and crops and onto live cultures.

“It’s the scourge of wine makers everywhere,” says 16 Tons owner Mike Coplin of brettanomyces, the genus of yeast that has made its name by infecting and drastically altering the taste and bouquet of wine. But while the yeast infects and destroys the delicacy of wine, it does the heavy beers a solid and grants them a moment of unique daintiness — namely in the form of wild beers. Many of the flavors that brettanomyces impart upon beer are considered to be unpalatable and signs of infestation, but a select few savor the sour flavors that the yeast leaves behind and have been harnessing the un-harnessable mutiny of the live culture to make unique, summery beers. 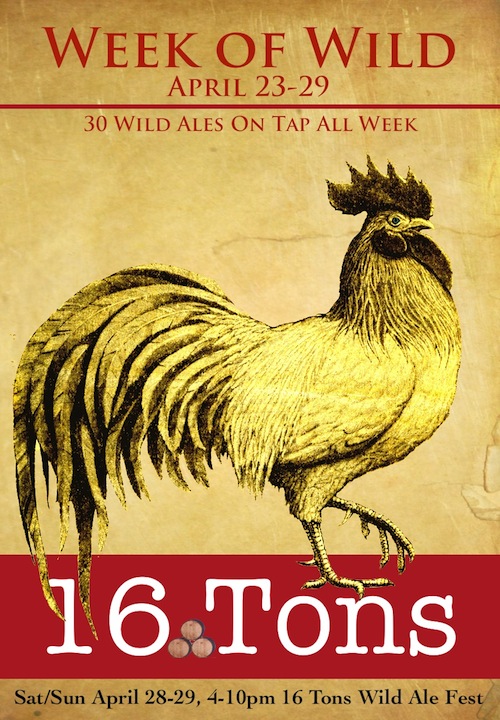 16 Tons’ Week of Wild has been featuring no fewer than 30 wild beers on draught and an even larger selection of bottles, so there’s far from a shortage in selection, but be warned; you might be surprised at what you taste. Most of this stuff is probably going to take a little acclamation — think both distinctively sour, and bizarre — due to the brettanomyces going to work, but there’s a plus side to the learning curve:

“There’s a romance to the unpredictability of spontaneous fermentation,” says Jeff Moores, 16 Tons co-owner, before going on to remark that the new flavors created by brettanomyces create food pairings akin to those of wine. Wild beers create a gauzy concreteness of flavor for those adventurous types that have been getting bored of the same old IPAs and porters, and they also bring to bat a characteristic of beer that is often left untouched — its ability to be palatable with any dish.

Joining 16 Tons for the last days of its Week of Wild and 2nd Anniversary event is highly recommended. Stop by, grab a yeasty beverage and start wildin’ out.